Today I’m going to answer some questions about kinesio tape.

You’ve probably seen it on a lot of professional athletes. It’s usually a black piece of tape covering an area of the body. It first became popular back in the early two thousands when the Women’s Beach Volleyball team won the Olympic gold medal for the United States. One of the athletes was wearing kinesio tape and everybody started asking questions about it.

We’ve been using it in our clinic for years and have had phenomenal results.

So what is it and how does it work?

Kinesio tape is a piece of elastic tape. It supports the muscles and tendons it covers, but it’s flexible and still allows full range of motion. Testing and researching kinesio tape has shown it to decrease muscle fatigue and allow a faster response time. It can also help prevent further injury because it makes your body more aware of that area, and it won’t push itself to the same limits as before.

So how does it work? It depends on how it’s applied.

If it’s applied in a single strip, it’s typically used as a supportive-type taping. This can even be done for pregnant women who have a lot of back pain or pain in their belly. It can also be applied to shoulder pain from rotator cuff injuries or knee pain from arthritis. It’s very common in athletes like runners who want that full range of motion without feeling limitations, but get some relief.

Sometimes it’s applied in a different format. You see it with little fingers on the end that spread out into fine little strips, for example.  These little strips lift the skin and decrease inflammation. When you apply the tape this way on someone with a bruise and then lift the tape, you can see exactly where the tape was. It left a pattern. There is no bruising where the tape was. The skin is white and free of any black or blue coloration, whereas the rest of the area is not. It’s pretty amazing how it can lift the skin and help the healing process began a whole lot sooner.

The third effect of Kinesio tape is on the nerves on top of the skin. For example, if you bump into something really hard with your elbow, what’s the first thing that you want to do? You want to grab it and rub it because it makes it feel better. Just putting some other stimulation onto the skin is going to reduce the pain.

Kinesio tape works the same way. Covering the skin on that injured elbow sends a different signal to the brain that allows the pain levels to come down. Some patients that have had chronic pain for years and years – in their heels, in their feet, knees, shoulders, neck, or back – use this tape and the pain has gone away almost immediately. 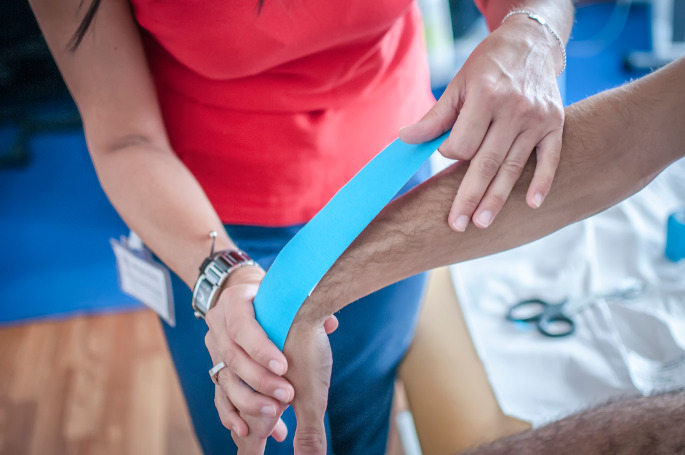 That doesn’t happen with everybody, but the good thing is that the worst thing that could happen with kinesio tape is nothing at all. So if nothing happens, okay. I think we had one patient in the thousands and thousands that we’ve taped who had some skin irritation, but the type of glue used has since been changed. So that irritation is very, very rare.

Kinesio tape is also great for patients who are in car accidents. If a patient’s been involved in a car accident, one of the first things you want to do is help stabilize those muscles as best you can. It can immediately help with the pain, and can speed recovery. It’s very useful for conditions like whiplash.

It can also be used to help knee-pain patients who are receiving regenerative medicine.

If you’ve heard about kinesio tape, or if you’ve used it and love it, leave a comment below. We’d love to hear about your experiences.